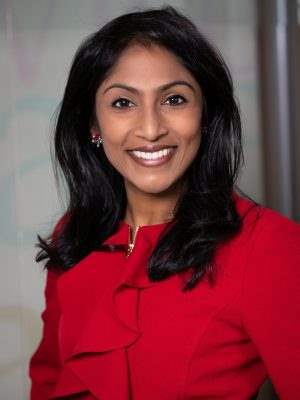 Krish is the President and CEO of Lutheran Immigration and Refugee Service. She previously served in the Obama White House as Policy Director for First Lady Michelle Obama and at the State Department as Senior Advisor under Secretary of State Hillary Clinton and Secretary of State John Kerry.

Krish has committed her career to public service because she knows how differently life could have turned out. Krish was 9-months old when she and her family escaped a country on the brink of civil war and built a life in Maryland. Her parents came to this country with no jobs and $200 in their pockets.

Krish’s interest in public service and grassroots politics began at an early age. In elementary school, Krish went knocking door to door with her mother in support of Senator Barbara Mikulski when she won her historic first race for the Senate. In college, Krish worked for another great public servant when she spent her summer back from college working for Senator Paul Sarbanes.

At the White House, Krish served as Policy Director for Michelle Obama and led the First Lady’s signature Let Girls Learn initiative. At the State Department, she coordinated development and implementation of multiple programs including those concerning refugees and migration, engagement with religious communities, the legal dimensions of U.S. foreign policy, and regional issues relating to Africa and the Middle East.  She worked closely with PRM, Consular Affairs, Health & Human Services and the Department of Defense.

Before joining the White House, Krish worked at McKinsey & Company, where she consulted for Fortune 100 companies, practiced law at Jenner & Block in Washington, DC, clerked for Chief Judge Michael Boudin on the U.S. Court of Appeals for the First Circuit, and taught at Georgetown University as an adjunct.

Krish and her husband, Collin O’Mara are the parents of a young daughter, Alana.