Skip to main content
You are here: Home › Action Alerts ›
| 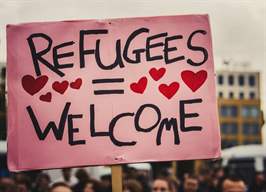 The President has officially set the refugee admissions goal for fiscal year 2021 at 15,000–the lowest admissions in the 40-year history of the U.S. Refugee Admissions Program. The administration has also moved away from allocating populations based on geographic need or vulnerability, which makes it less likely that 15,000 refugees will actually be resettled.

For nearly four decades, the annual goal has averaged 95,000 refugees. Today, there are 29.6 million refugees worldwide—but refugees are more than just a global figure; they are families torn apart, children who have witnessed profound violence and people seeking a chance to rebuild their lives and raise a family in safety.

As people who care about refugees, we must make our voices heard and tell Congress that the new record-low refugee admissions goal is immoral and a betrayal to the U.S.’s legacy as a global humanitarian leader.

Send an email to your legislator and tell them to publicly condemn the 15,000 FY21 admissions goal set by the President.

Compose a message to your US Senators & Representatives here.